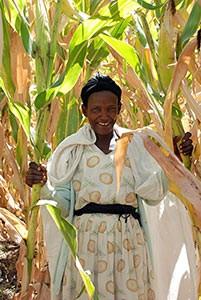 In Ethiopia, maize now ranks first among cereals for production, and second in area planted. Since 1993, its production has increased four-fold and area planted two-and-a-half times. Ethiopian families increasingly rely on maize as a staple due to its higher productivity and lower production costs, compared to other cereals.

But maize is poor in balanced protein, lacking two essential amino acids – lysine and tryptophan. Consequently, where maize consumption is high and that of other protein sources low, people are at risk of protein deficiency. In the Southern Nations, Nationalities and Peoples Region where maize accounts for more than 60 percent of the dietary protein intake, an estimated 85–90 percent of the population is at risk of inadequate lysine intake.